← Hedges CMS Red and More
Washington Syrah and Other Links →

A Couple of Central Coast Chardonnays 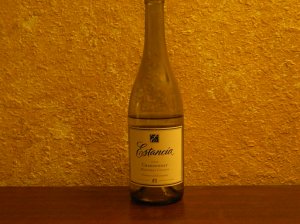 The Central Coast AVA encompasses a large area in California, that basically streches from San Francisco Bay to Santa Barbara County.  There are many smaller AVAs located within the Central Coast, one of them being Monterey County AVA .  Located in the northern part of the Central Coast, most of the vineyards are located in the Salinas Valley, and Chardonnay is the most planted grape, at around 36,000 acres.  Estancia is an estate winery located in Monterey County in Acampo, CA.  They have a nice selection of wines, and I recently tried their 2009 Chardonnay.  Overall the wine had some nice characteristics; it was light gold in color with hints of toasty oak and ripe apple on the nose, and had a nice smooth, crisp flavor of apples on the finish with a nice balance of tannins and acids.  However, I do think there was just a little too much oak in the wine,  which at times seemed just a bit overpowering.   Another Central Coast Chardonnay I tried was Firefly Ridge, which is a private label wine for Safeway stores and is located in Livermore, CA, within the Livemore Valley AVA.  This 2009 was actually a pretty decent wine.  It also had a nice nose of fresh apples with more of a lighter straw color, and on the finish more of that fresh apple with a touch of citrus.  Again however, it also seemed to have a little too much oak.  I’m not huge fan of really oaky chardonnays, and I think just touch of oak can do the trick most of the time.  But if you don’t mind a heavy dose of toasty oak in your chardonnay, then either one of these wines would be a fine choice.

It appears the “Sideways Effect” has been reversed in California.

Asian thirst for French wine and spirits has helped France to a record year.

And here’s an interesting new glassware design, looks like it has the potential to be a bit challenging to drink from after a few glasses…

Have a great rest of the week!

← Hedges CMS Red and More
Washington Syrah and Other Links →